Spiritual Baptists in Trinidad and Tobago

TODAY IS YET
ANOTHER PUBLIC HOLIDAY
IN TRINIDAD AND TOBAGO 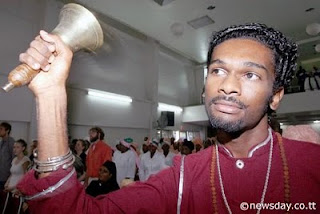 The origins and early development of the Spiritual and Shouter Baptist religion in Trinidad are not well known but the consensus is that the religion developed among the people of African descent during the nineteenth century.

It can be found throughout the Caribbean under various names but according to  spiritual Baptiste writer Hazel Ann Gibbs de Peza, the names Spiritual and Shouter Baptist is specific to Trinidad. It is a unique religion, comprising elements of both Protestant Christianity and African doctrines and rituals. It is also one of the few religions indigenous to Trinidad. With the exception of Orisha, all other religions were brought to the country by either European colonizers or Indian indentured labourers.

The term Shouter was given to the Baptists because of their tendency to shout, clap and sing loudly during their religious services. It was a derogatory term imposed on them by mainstream society. During their fight to have the Shouters Prohibition Ordinance repealed, the Baptists decided to use the term Spiritual Baptists instead of Shouter Baptists in an effort to gain some respectability for their religion.

There are four theories that place the roots of the Spiritual and Shouter Baptist religion in Africa, North America, St. Vincent and Grenada.

The first theory suggests that certain practices of the Spiritual and Shouter Baptist faith can be traced directly to Africa. While researchers agree on Africa, there is some dispute as to where in Africa. Religious practices from Dahomey, Kongo, West Africa and Yoruba have all been identified as being similar to that of the Spiritual and Shouter Baptists in Trinidad. The African theory is not well documented.

When Trinidad became a British colony in 1797, there was a new influx of settlers. A group of former American slaves who had supported Britain during the War of American Independence, were rewarded for their loyalty.
They were given freedom and grants of land in south Trinidad. They formed “company villages“ which were named after the military companies in which they had served (Henry, 2003). For example, Fifth Company, Moruga. These settlers brought their Baptist faith with them.

Yet another theory suggests that the roots of the Spiritual and Shouter Baptists can be found in the migration of fundamental Protestants known as “Shakers“ from St. Vincent to Trinidad during the early part of the twentieth century.

In addition to the African influence, there was also the Protestant Christian influence on the Spiritual and Shouter Baptist religion. Among the influx of settlers to Trinidad after the island became a British colony, were the British themselves. They brought the Anglican religion with them. This, together with the African rituals and customs, greatly influenced the direction of the Spiritual and Shouter Baptist faith. 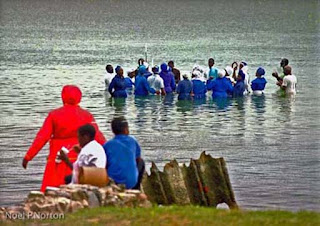 Although the origins of the Spiritual and Shouter Baptist faith in Trinidad can be traced to foreign countries, it has evolved over time to become a unique, indigenous religion. It has managed to fuse the spontaneity and rhythms of Africa with the restrained, traditional tenets of Christianity to produce a religion that is vibrant, expressive and dynamic. 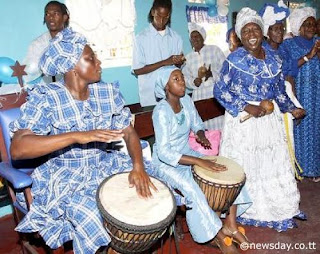