Carnival 2016 and What Recession??

We are moving into Carnival proper here in Trinidad . The Soca Monarch Finals in the Dimanche Gras Show are taking place as I write and the parties continue.  All of this  leads us into J'ouvert which starts at 4am tomorrow morning (Monday) followed by the start of the 'greatest show on earth', the street party that is Carnival Monday and Tuesday. 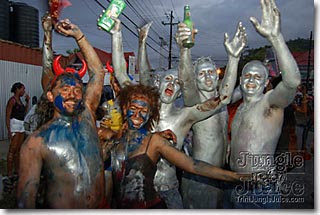 J'ouvert is the raw heart of Trinidad Carnival. It is a massive, night-time street party and procession which crystallizes in central Port of Spain in the early hours of Lundi Gras, before the daytime carnival parades. Really it is a continuation of the season’s 'fetes', parties, of the night before as tens of thousands of revellers spill out onto the streets from about two o'clock looking for more fun. They dance till dawn and beyond - J'ouvert (pronounced jouvay) is a creole corruption of the French jour ouvert meaning day break or morning and signals the start of the bacchanalia that is Carnival.

J’ouvert is full of symbols of culture and heritage. It is steeped in tradition and playing mud Mas involves participants known as Jab Jabs covering themselves from head to toe and others in paint, chocolate, mud, white powder or just about anything that sticks. It is J’ouvert custom that no one is clean and a common sight is a being hugged by a muddy revelers. 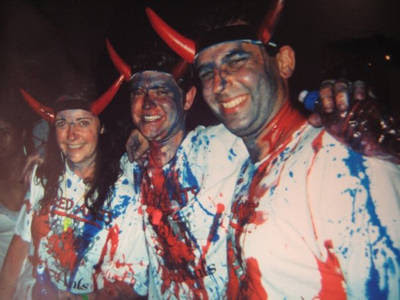 This traditional part of Carnival starts at around four in the morning and finishes after sunrise. Calypso, Pan and Soca music are the dominating sounds of J’ouvert in Trinidad and the mass of revellers take the street party wining and chipping their way to the Savannah in Port of Spain in the early hours of Lundi Gras, before the daytime carnival parades.

The roots of J’ouvert in Trinidad go back 200 years, with the arrival of French plantation owners. The French never colonised Trinidad, however elements of their culture remained. J’Ouvert evolved from the Canboulay festivals in the 1800’s, which were night time celebrations where the landowners dressed up and imitated the negres jardins (garden slaves). Following emancipation, the newly freed slaves took over Canboulay, now imitating their former masters imitating them.

Canboulay revellers, who carried lighted cane torches, were seen as a potential risk by the authorities and the tension mounted leading to the Canboulay riots. It was eventually banned, and then was re established as J’ouvert. The Canboulay Riots are now acted out in the streets during the week leading up to Carnival. The spectacular costumes represent characters and events from the history and folklore. Moko Jumbie Bats, Bookmen, Baby dolls, jab molassie, devil mas are all traditional Carnival characters that capture the elements of the past, and continue to tell the story. 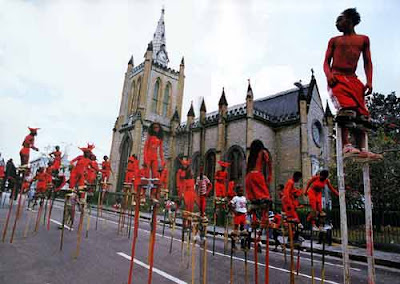 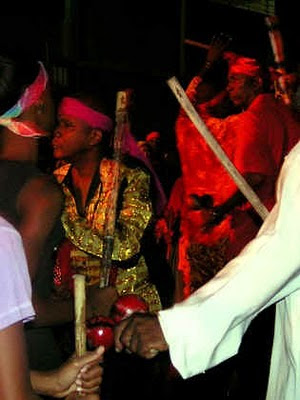 So here we go again, when crime will be at an all time low between Monday and Tuesday, when people have spent, although we are in a recession,  thousands of dollars on costumes they can't afford, when there will be integration of all the races that make up Trinidad and Tobago without any trouble (by Ash Wednesday they will be ignoring or fighting with one another again!), when non-stop music will fill the air, when visitors from all over the world will come and spend their US dollars, UK pounds and Euro dollars.  And we really do need the foreign exchange! 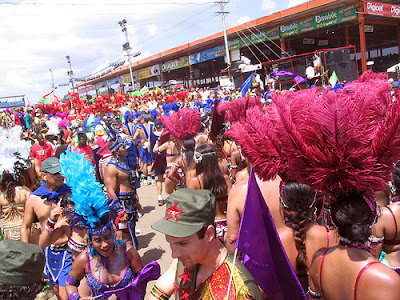 It is a lovely time and the only thing that threatens to spoil it at the moment is the strong possibility of rain!!
Posted by The Blog of Bee at Sunday, February 07, 2016 5 comments: