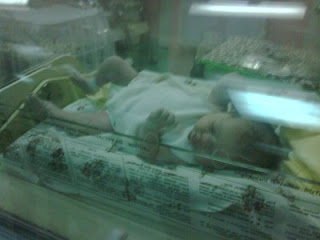 Now she sleeps
On my shoulder
Surrounded by
Love and care
Unconcerned
Of what
Her future holds
No knowledge
Of what
Her contribution
To the world
Will be
I am reminded
Of my own
My son
Once new life
Now taking
Photographs
Of the miracle
In my arms
Of my daughter
Once new life
Just like this
Her head
Against
My shoulder
Welcome
Jayla
Posted by The Blog of Bee at Wednesday, July 22, 2009 7 comments: 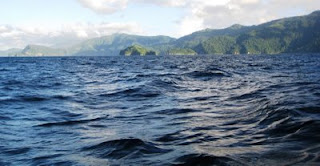 This foto of the island, Sau de Eeau was taken by my son, from his boat in 2007. When I first saw it I thought it was a painting.

As explained to me by my son, this area is a deep sea basin which is a depression of the sea floor more or less equidimensional in form and of variable extent. Scientists, geologists, meteorologists and marine experts will understand this as I am sure some of you will. I did geography but you can leave me out on this one!
My son took an interest in photography at a very early age which may have had something to do with the fact that my husband never went anywhere without his camera. I’ve lost count of the number of cameras we had in the house. Around the age of ten (none of us can remember exactly when) his Christmas present was a Pentax P30T which he tells me, he still has! So he went through a stage when he clicked anything and everything in sight not taking into consideration, at his young age the cost of rolls of film and developing. Major expense!! He also had ‘small library’ of books on photography.

By mid teens the novelty of camera, exposure, photography books, lighting and capturing that “Kodak Moment’ wore off.

If the above is anything to go by I am very happy to know that the ‘bug’ has returned, he once again never goes anywhere without his camera and we can look forward to many hours of enjoyment at his expense! Also, thank God for Digital cameras.
Posted by The Blog of Bee at Friday, July 17, 2009 4 comments:

I absolutely love this from Shakespeare's Henry Vth, Act 111, Scene 1. The grand speech on the eve of the Battle of Agincourt as the king stirs his men into action. Another piece I had to learn at school. And I can still remember it!! I recall in the 60s watching the film starring a young Lawrence Olivier - we had to watch it as we were doing Henry Vth for 'O' Level. Kenneth Branagh's production many years later didn't stir the same emotions!

Once more unto the breach, dear friends, once more;
Or close the wall up with our English dead.
In peace there's nothing so becomes a man
As modest stillness and humility:
But when the blast of war blows in our ears,
Then imitate the action of the tiger;
Stiffen the sinews, summon up the blood,
Disguise fair nature with hard-favour'd rage;
Then lend the eye a terrible aspect;
Let pry through the portage of the head
Like the brass cannon; let the brow o'erwhelm it
As fearfully as doth a galled rock
O'erhang and jutty his confounded base,
Swill'd with the wild and wasteful ocean.
Now set the teeth and stretch the nostril wide,
Hold hard the breath and bend up every spirit
To his full height. On, on, you noblest English.
Whose blood is fet from fathers of war-proof!
Fathers that, like so many Alexanders,
Have in these parts from morn till even fought
And sheathed their swords for lack of argument:
Dishonour not your mothers; now attest
That those whom you call'd fathers did beget you.
Be copy now to men of grosser blood,
And teach them how to war. And you, good yeoman,
Whose limbs were made in England, show us here
The mettle of your pasture; let us swear
That you are worth your breeding; which I doubt not;
For there is none of you so mean and base,
That hath not noble lustre in your eyes.
I see you stand like greyhounds in the slips,
Straining upon the start. The game's afoot:
Follow your spirit, and upon this charge
Cry 'God for Harry, England, and Saint George!'
Posted by The Blog of Bee at Wednesday, July 15, 2009 2 comments:

Email ThisBlogThis!Share to TwitterShare to FacebookShare to Pinterest
Labels: once more unto the breach
Newer Posts Older Posts Home
Subscribe to: Posts (Atom)