The Reason for the Season

Since my son's wedding I have been rather caught up in trying to get myself together for Christmas.  I don't think it's working because  yesterday I forgot to take the ham out of the freezer so that i could bake it today! Why? Because I thought yesterday was the 22 December.  Honestly, I had everything planned! It just so happened that I was a day out.  Can you believe that??
Apparently when I realized this morning that I was a day out  and passed a comment about not having defrosted the ham, the master of the house (or so he thinks!) said that as a result of a remark I made recently, he had decided not to interfere! Not interfere?!! Is he mad? There are some things that husbands are expected to comment on. Not butts, weight, extra tyres but definitely on hams that have not been taken out of the freezer! So I slugged a shot of Stolle, took the ham out of the freezer and did other things - like write a report of my department's activities over the last twelve months. It is now 12.35am Trinidad time, the ham has defrosted, is now oven prepared and I will shock the family by rising at three and throwing it into the oven!I will then go back to bed for three hours!
I have been to a couple of Malls over the last few days - total disaster and exercises in futility. In one there was live music with Christmas carols and songs that people here think are Christmas carols. Just hearing 'O Little town of Bethlehem' reduced me to tears as memories of Christmases past came to mind.  you don't think that's going to happen when you get to my age but according to a friend of many years, 'it's an older woman thing'.  the mall where I broke down looks like this.  I made my reluctant daughter take a photos - 'they'll think you're a tourist'.!!! Whatever.....................
That's where Father Christmas was going to sit but I didn't hang around! 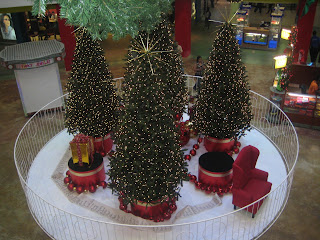 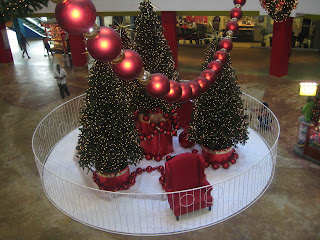 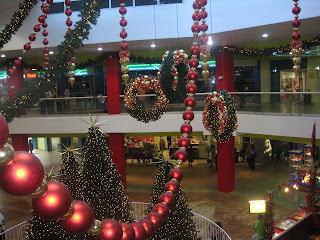 I didn't bother to cry when I saw this one - it's crooked!  But the main display was beautiful so I didn't look!! 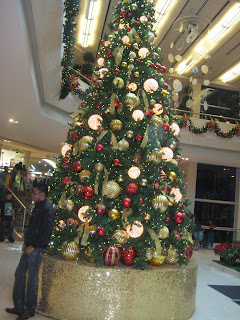 The Malls were crowded - although it doesn't seem so looking at these photos.  Shops were crowded, teens were just hanging around, people stopped in front of you so that you bumped into them, you apologized to them although it's not your fault, they glared at you, the hustle, bustle, loud voices, Christmas carols and songs, a tropical nation pretending that there's snow and through it all, cash registers ringing themselves off the counter tops and shop owners rubbing their hands with glee.
I wonder how many of them actually remember the reason for the season!

I wish each and every one of you who come to my page and those close to you. a warm and wonderful Christmas filled with peace, love, joy and abundant blessings.
There is a reason for the season.
Posted by The Blog of Bee at Friday, December 24, 2010