All Souls and A Birthday 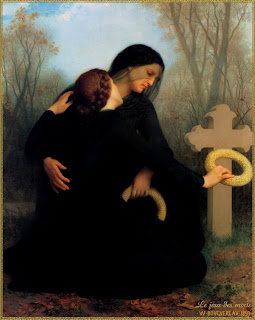 All Soul's Day is a Roman Catholic day of remembrance for friends and loved ones who have passed away.  It is celebrated on 2 November, or if it falls on a Sunday. on the 3 November.  The Office of the Dead must be recited by the clergy at all Masses and those Masses are to be Requiem.

The theological basis for the feast is the doctrine that  those souls which leave the body not perfectly cleansed, or have not fully atoned for past sins cannot yet see God.  Those left on earth can apparently help these souls by praying for them, giving alms and offering Masses which will help in their release from Purgatory.

There are many customs and rituals followed in various countries. In Trinidad, the cemeteries and grave yards are cleaned up in the days leading up to All Souls.  Relatives normally visit the family graves on the 1 November (All Saints) to pimp and preen for the following day.


Today many families will go to their family plots or single plots, gather round and even bring picnic baskets.  Tonight every non-forgotten grave will be lit up by candles so that the cemetery will just, for one night of the year, be bathed in candle light.  It would be nice to think that the visitors will put candles on the forgotten graves as well.  I think it's as well to remember that not all graves that appear to be  'forgotten', actually are.  Circumstances don't always allow for people to visit.


I like the customs of some European countries where a candle is burning at the grave continuously as it was for my Austrian grandmother. Sadly there is no one left to burn the candle but I know the cemetery keepers do tend to keep the flame alight.  Then there are the countries where the grave has a photo of the deceased with the burning candle.


It would seem that this day of remembrance comes from the ancient Pagan Festival of the Dead.  The Pagan belief is that the souls of the dead return for a meal with the family (hence the picnic baskets??)  Candles in the window would guide the souls back home and another place was set at the table.  Children would come through the village asking for food to be offered symbolically to the dead, then donated to feed the hungry.

The Christian  origins of the day have been attributed to various religious orders - some say the Cluny Order, others the Benedictines.  If it was started by St Odilo of Cluny  at the Cluny Abbey in France, the tradition is 1012 years old.  Other monasteries throughout France adopted  the tradition and it quickly spread throughout the western church.  It was only in the 14th century that this day was officially recognized by Rome.

So when I go home this evening I will light candles by the photos of my parents.  I do this on birthdays, anniversaries and sometimes just on any day that I feel like it.

And when we have said a prayer and blown out the candle, we will light the candles on my husband's birthday cake and give thanks for his life as he goes rushing into another decade with guns blazing.  He  thinks he's still twenty!!!
Posted by The Blog of Bee at Tuesday, November 02, 2010

Email ThisBlogThis!Share to TwitterShare to FacebookShare to Pinterest
Labels: all souls, birthday, candles, day of the dead