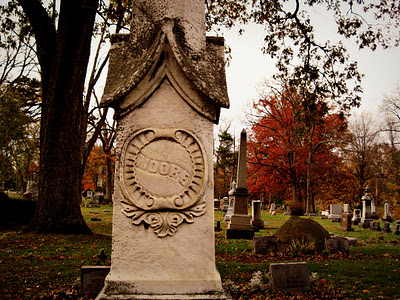 Photograph courtesy Tess Kinkaid, Magpie Tales
I finally found the church.  I knew your grave was there somewhere and was surprised that after so many years it was in such pristine condition. A family member renovated it perhaps?  I was surprised too to find such a large memorial stone amongst the smaller ones.  The parish records showed the dates of your birth, baptism and death.   Carefully recorded by whoever kept the records at the time. Whoever did, had a neat hand which suggests an educated person. Maybe the sexton, maybe the minister.  Definitely not a woman.  Someone who knew you. Someone who knew the family.  How did the recorder feel when he wrote the words ‘date of death’ in the parish records?  Cause of death remains blank. Strange that!
When the family bible was returned to me (after much searching and incessantly nagging at relatives) I flicked through it just happy that it was back with who I considered to be its rightful owner – me.  After all, my paternal grandfather had inherited it and my grandmother had ensured that all the family births, baptisms, confirmations, marriages and deaths were recorded.
I first heard of the family bible from my father when I was quite young.  He only knew that it had been in the family home and that his mother was the person responsible for it.  When she died, my father was serving abroad and by the time he reached England, relatives had ‘ransacked’ the house.  It wasn’t until sometime later that my father (an only child) realized that the family bible was missing.  When he finally found out who had it, the person – his cousin – refused to return it.  He didn’t really want it. He just didn’t want my father to have it.
After my father died, I decided to pursue the family bible.  as an only child, I wanted, thirsted for family history.  I wanted to know about my ancestors. I knew that my paternal grandmother was Irish.  I knew something of my English/Welsh grandfather’s (one of fourteen of which eleven survived) family – one of his brothers threw an ink pot at his teacher and promptly ran off to sea – last heard of in the United States of America! Anyway cut a long story short, I now have the family bible which dates back to 1820. It was kept religiously until the year my grandmother died in 1948.  I was the last but one to be entered. She never recorded her brother in law’s death.  She got up from her sick bed to go to his funeral and three weeks later, died of pneumonia.
I fell ill and tired of Face Book, Blogger and Multiply,  went through my bookshelf where I found the family bible that I had sought for so many years and then just put on a shelf to gather dust. I began to read and the more I read, the more my interest was piqued.  Family trees are fascinating. Who married who, who was born when, who died when but never a mention of divorce. I was told many years later that my divorce was a first in the family. Would that have been recorded had the family bible still been active? No mention of Great Aunt Dorothy  – family lore has it that this southerner bewitched and snared Great Uncle Edward. It was only at the wedding that she introduced her fourteen year old son to the family by which time it was too late.
After much searching I am here standing in front of your memorial stone.  Why am I here? Why do I have such an interest in you?  Why you above all others between 1858 and 1948? Ninety years of family history and I chose you. Actually, I didn’t.  You chose me, a descendant on my father’s side.  It was only when I read the family bible that things began to fall into place.   The recurring dreams I’ve had since I was four years old. Always a child in the dream. The same child. A very young child.  Dreams of a young woman watching the child. Dreams of a man watching the young woman.  Dreams of the same man holding the young woman.  Dreams of a  different woman crying. Dreams of the man berating the crying woman.  And then the awful indescribable dream of the young woman putting a pillow over the child’s face.  The dream of a funeral after which a tall headstone is erected. Grieving man, crying woman. The people of dreams past.  The parents. And nearby stands the young woman watching and waiting to console.
I know your story little one but what can I do about it now?  I cannot ask the scribe in the church what he thought.  I cannot ask your mother if she suspected your father’s affair with your nanny?  I cannot ask your nanny why.  What I can do little one, is tell that your father’s death is recorded in the parish records by the same educated hand and in the family bible probably by your maternal grandmother’s delicate hand.   Cause of death: suicide.
Rest in peace little one. Come to me in dreams no more. I have told your story.