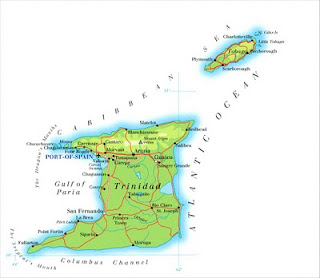 For years now I've been hearing how God is a Trini and because of this, together with the fact that Trinidad and Tobago is a land of praying people, the nation will never suffer a major earthquake.  I have experienced several earthquakes since I came to these shores in 1992 but none was ever enough to get upset about.  Yes I've seen the chandeliers swinging,  computers working their way off desks, choppy waters in the swimming pool, pictures moving and a couple of things falling of shelves.  I have even been 'down d islands' as they say here and been woken at daybreak by a very loud rumbling noise and been known to ask my husband 'why is there a train running through the house (we were on a tiny island in the middle of the sea for God's sakes!)  only to be told it was an earthquake.  None of this has ever phased me and certainly never been enough to frighten me to death.

But I think all that is about to change.   Regardless of what 'Trinis' say, the reality is that we are being warned by the Seismic Centre and the Office of Disaster Preparedness (that in itself is a joke as it's not prepared for anything let alone an earthquake of grand proportions) that this could be the year when we see an absolute disaster.  Not awfully encouraging really for a small island with a population of 1.3 million, a great deal of reclaimed land and buildings that were not built to withstand earthquake and hurricane!

Our sister isle Tobago is on the Caribbean Plate and Trinidad on the boundary between the South American and Caribbean plates.  The trench between the two island is not the only plate boundary.  The boundary is also on the Northern Range (mountains) and the fault line extends from there across to northern  Venezuela onto Colombia and then to the Andean Mountains.  Most earthquakes that occur in this region normally happen a couple of kilometres North of Trinidad and several kilometres down in the sea. But that's not to say there could not be something closer and the Seismic Office is saying that it's only a matter of time.


So this morning I was not amused when I opened an e mail which told me that one Dr Leslie Roberts has made a prediction regarding the future 'health' of Trinidad and if one is to believe him, things are not looking good for us here on this tropical island.  I immediately Googled said prophet only to find that his Prophecy website is closed to all unless one registers. Sod that!


This is what he supposedly predicted for the small island on which I live whilst he was here last year:


November 18 at 9:05pm
There's a POWERFUL prophet in our country named Dr. Leslie Rogers...he's one of the most renowned and accurate prophets. He held an annual prophetic conference to which I went to the Friday that Rick gave his testimony in the Reinzi Complex, it was HUGE. All of his prophecies he has ever gave came to past. And he has the track record and testimonies from others to prove it. Predictions about disasters, government...not only in our country but in other countries as well, he made and they ALL came to past (he has them on tape from when he made them too so he also got the evidence.)

Anyway, he made a prophecy about Trinidad . Hurricanes and earthquakes were always targeted by Trinidad (which is true) but he said that God has been merciful and long-suffering with us and He keeps sparing our land.

But Trinidad in the year 2011 will be hit by an earthquake...even WORSE than Haiti . Many will PERISH. This earthquake will happen North, South and West of this country (amazingly it's where all the major clubs and crimes are). He said that only Trinidad will be hit, not Tobago and it will occur early in the morning before 6:00AM. Signs will occur he said, Barbados and Grenada will begin to show signs of tremors, fishermen will begin to come from the seas and talk about how the fishes are acting weird and strange (According to the book of Job animals and fishes can predict these impending disasters and proof of this is that they begin to act weird). Also, its INEVITABLE. This is not demonic but divine. God is sending judgment to the land and especially to the church. He included also that there are wicked people in the church and God is fed up of them.

He placed his entire reputation on the line (as usual) with this prophetic word. And there is no doubt in my heart that this will happen. Stuff that I have never seen before in my country, I see them happening now and its so disturbing. No wonder God is going to do this.
Interestingly enough he doesn't say which church. Trinidad is predominantly Roman Catholic closely followed by Hinduism and Islam.  Then there are the Anglicans, Presbyterians, Protestants, Evangelicals, Pentecostals, Shouters Baptists and various 'small churches'.
I don't think I want to end up in a place looking like the picture below (Haiti after the earthquake) although there are some areas in this country that already look very similar due to government neglect. 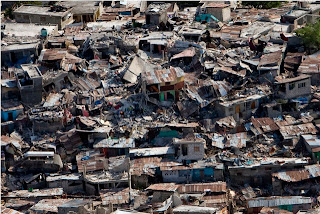 One of the small churches is bringing Benny Hinn into Trinidad later this week.  I wonder what he will have to say on the matter when he's finished pushing people to the floor!  Last time he was here he said of the then Prime Minister that he was a 'very stupid man'.  We didn't need a 'prophet' to tell us that!!!
Posted by The Blog of Bee at Wednesday, February 16, 2011