It's Official. H1N1 in Trinidad 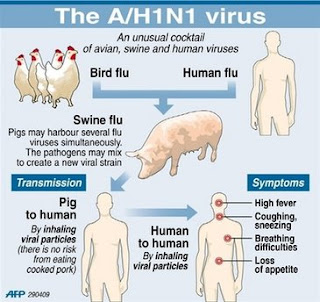 It's official. As if we haven't enough to contend with, H1N1 has hit Trinidad and there have been five deaths during the last few days. That is not good for an island with a population of merely 1.3 million a large proportion of which do not feel it is necessary to cover their mouths when they cough or sneeze! Sad but true. I remember as a child living in Singapore, how I used to heave when people, no matter where they were, cleared their throats and spat. Lee Kuan Yew brought an end to that. No one is going to bring an end to that here. 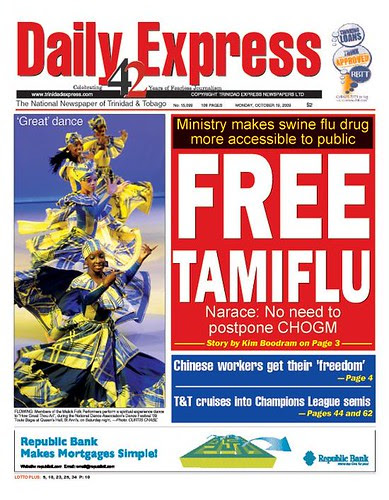 There is a great spiel on how the drug will be available for everyone at public and private institutions, at no cost. Well that won't be true. First of all the government has only 200,000 plus doses and secondly no private institution is going to administer the drug free of charge.

As usual the Minister of Health has said there is no need for panic. You tell that to you mother/father/child/tantie/uncle et al when they have been sitting in A&E for thirteen hours with uncontrolled fever and no one is attending to them. Yes there is a normal flu bug around too but how can one be sure without some sort of appraisal. One person went to a private doctor twice and was given medication. He eventually went to the public hospital. He is dead. So people are not supposed to panic. Of course people will panic. More so when they know that the only option for them is to stay here and hope that they are treated in a health service which is in total disarray. One family complained that they had to share two masks when they arrived at the hospital. Some months ago when my daughter was ill and I had her tested for H1NI in a private hospital, she was given a mask - I was not!

The best place to be is out on the beach. That is the safest place according to one of our more prominent doctors. The germs don't like the open air and steer clear of sun, sand and sea. It's raining! 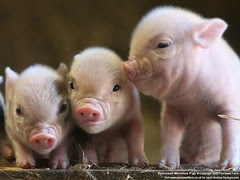 Email ThisBlogThis!Share to TwitterShare to FacebookShare to Pinterest
Labels: H1N1