And So the Rains Came 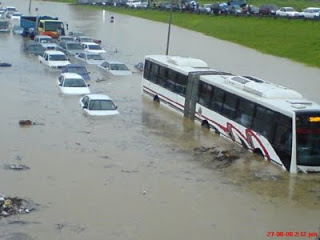 This morning we are experiencing torrential rain in the paradise island of Trinidad.

Highways, bi-ways and other roads are already flooding. People are turning back. Reports are coming out of the capital that water is rising. No doubt rivers will over flow once again because of the rubbish that people dump into them during the dry season. Houses will be flooded out if not swept away. Household appliances, furniture and personal assets will be destroyed because developers have been allowed to cut down the rain forests which allows water to gush down into the valleys and take control of peoples' lives.

It's the same story year in, year out and once again the government has not put things in to place to stop this stupidity. They are too busy building things that are of no benefit to the man in the street.

People will hold their heads in their hands, bawl and cry as they watch the water containing dirt, soil, vermin and the strong possibility of disease flowing into their homes. they are the lucky ones. Some homes are washed away.

These people will still vote for the ruling party which does into seem to understand that it is a government elected by the people for the people.

The above photograph was taken last year and I strongly suspect that by 2.00pm today we could be in the same boat! Perhaps we should have boats and kayaks for hire on the side of all major roads.
Posted by The Blog of Bee at Tuesday, October 06, 2009