This poem is not mine. It was written by Staff Sergeant Andy McFarlane, 47, who is serving with the Territorial Army in Afghanistan. He accuses ministers of ‘hiding’ when bodies of fallen troops are returned home. The scathing verses, written from the front line, attack politicians for avoiding the ever frequent ceremonies held when the coffins arrive back on British soil.


The father of two from Bicester, Oxfordshire, England wrote another poem, ‘Sunset Vigil’ after the death of eight soldiers in the space of a twenty four hour period in the second week of last August.
The poem was posted on Face Book and emerged on the 17 August after a weekend which saw the British death toll in Afghanistan rise to 204 and following the release of data showing that July was the bloodiest month for injuries.


The leviathan of the sky does land
In England's green and pleasant land.
Its cargo more precious than gold
The body of a hero, bold.

Once the giant's engines stopped
The cargo ramp is gently dropped
Carried by six on shoulders true
The hero is saluted by the crew.

The coffin draped in Union Jack
Is slowly carried out the back.
Out of the dark and into light
Slowly down the ramp and to the right.

The six approach the hearse all black
And place the hero gently in the back.
The six then turn and march away
Their duty has been done this day.

Politicians usually have much to say
No sign of them near here this day.
They hide away and out of danger,
Much easier if the hero is a stranger.

The hearse with its precious load
Moves slowly out onto the road.
The floral tributes line the route
While comrades snap a smart salute.

At the edge of a Wiltshire town
The cortege slows its pace right down.
The streets are packed, many deep,
Some throw flowers, most just weep.

The crowd have come to say farewell,
The church bell rings a low death knell.
Regimental standards are lowered down
As the hero passed through the town.

The cortege stops and silence reigns
The townsfolk feel the family's pain.
The nations' flag lowered to half mast
Our brave hero is home at last.

When the bodies of the fallen are returned to the UK they pass through the small market town of Wootton Bassett. If the town had had the money to build a proposed by-pass, although mentioned in the Doomsday Book, it would never have found a place in history. Lack of funds to divert traffic has had the unforeseen consequence of turning this otherwise obscure market town in Wiltshire into a national focus for honouring those who have given their lives in the service of their country.

The ceremony that has grown up in Wootton Bassett is as simple and moving as the coffins themselves, wrapped only in the Union flag. As the hearses approach, the tenor bell of St Bartholomew's Church begins to toll. Business stops while shoppers and shopkeepers join the crowds lining the pavement. When the cortege reaches the war memorial, the president of the British Legion says a single word – "Up" – to mark the moment when ex- and serving members of the forces should begin their salute. "Down," he says 60 seconds later, as the hearses move on. 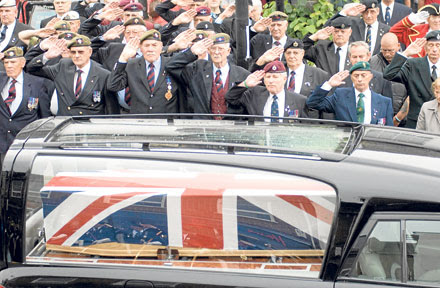