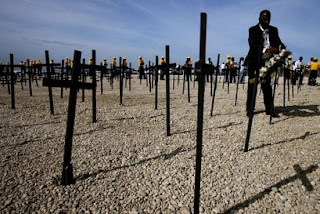 A year to the day after the Haitian earthquake in which more than 230,000 lost their lives  and over a million still remain homeless what has been done?  Not only did the nation suffer that devastating quake but before it could even begin to think about regaining its strength, it was hit by Hurricane Tomas.  As if that wasn't enough, Cholera hit and to date over 3,500 people died.  They died because they weren't properly treated, medically.  Cholera in this day and age is not a killer - except if one lives in the devastated Haiti. Add all that to political savagery and you have a country which really has no chance of ever getting off the ground.
I was  watching BBC World News this morning. A Director from one of the British Aid organizations said that things are exactly as they were a year ago.  Nothing has moved or been moved.  Rubble is still lying where it fell.  Faith-based workers insist that some progress has been made but given that in addition to the rubble, the Presidential Palace is still in ruins, thousands are living in 'tent city'  and others are living in tents amongst broken stained glass windows and  more rubble in the grounds of the destroyed Catholic Cathedral, that's hard to believe.

The aid response has been severely criticized.  Questions are being asked as to the whereabouts  of  missing monies and why monies pledged from various governments have not come through.

As a service was conducted at a mass burial site in Haiti with President Preval laying a wreath to commemorate the dead, President Obama released a statement in which he   commended the US's role in "one of the largest humanitarian efforts ever attempted" adding that helping the poorest nation would take decades.  "Still too much rubble continues to clog the street, too many people are still living in tents and for so many Haitians progress has not come fast enough."

So just why hasn't more been done? Billions of dollars in aid were promised from countries around the world, nonprofit organizations supposedly raised hundreds of millions in the weeks following the quake and the Roman Catholic Church here in Trinidad raised over 3 million US$ in less than a week.  Many of those countries have not followed through on their pledges and it is alleged that crucial funds have been misspent.

the US gave more than $1.4 billion to relief aid but only 38% of that has been spent to provide recovery and rebuilding aid.
A leading international charity has criticized the relief effort, calling it a "quagmire" saying that the recovery commission chaired by former US President Bill Clinton had "failed to live up to its mandate". Clinton's response was that he wished more could have been done. "Look, nobody has been more frustrated than I am that we haven't done more".
Why has the world given up on Haiti?  Granted Haitian Presidents have ruled by fear, corruption has been rife for years and years but that together with the fact that it was barely running prior to the earthquake is not an excuse.  People are involved here. Human beings who deserve to be able to live their lives with dignity.
Where has the money that was supposed to deliver the goods, gone?
Interestingly, it has been said that beneath the rubble and tragedy of Haiti lies what some believe to be the world's richest zones for oil and gas hydrocarbons outside of the Middle East.  If this is the case then the rumours of the US, France and Canada working on dividing the island for future mineral control, under the guise of relief work, are possibly true.  Apparently China is objecting to such a division of Haiti's wealth.   So it could be that everyone wants in on the act which would account partially, for the slowness of the 'clean up'
Not even aid comes free!
Posted by The Blog of Bee at Wednesday, January 12, 2011