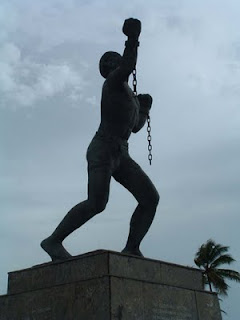 Tomorrow, 1 August is Emancipation Day in Trinidad and Tobago.  On 1 August 1985 Trinidad and Tobago became the first country in the world to declare a national holiday to commemorate the abolition of slavery.  I am not going to go into all the political 'hoo hah', the in-fighting and the various arguments that go on in this country whenever national events such as this one happens.  I am however going to share a little of black history for those who may be interested in what I would describe as the worst kind of exploitation that has ever taken place. I have researched various historical documents on this subject so acknowledgment is due to their authors. 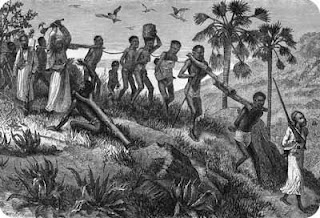 The history of the New World since Columbus re-discovered it, is one of conquest, pillage, exploitation and forced migration of people. 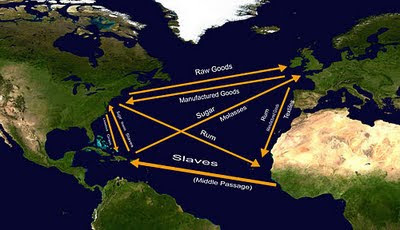 Slavery existed in Africa before the arrival of the Europeans. However they were treated much more kindly than they would come to be treated by the Europeans. Slavery in many African societies was a temporary state, usually occurring as punishment for a crime or to pay off a debt. With the arrival of Europeans however, the face of slavery was changed forever. Slavery became an organized business. English slave ships would arrive on the West coast of Africa with a cargo of guns, alcohol, goods, beads and trinkets. These would be traded with the Africans in exchange for slaves. To assure a steady supply of slaves for the colonies, African tribes were encouraged by the Europeans to raid other tribes and capture their people. These captives would be bound in iron neck rings and linked together with chains and forced to march to the coast, where they would be housed in barracoons (holding pens) in unhealthy conditions, until a slave ship arrived. The captain of the slave ship would then choose the slaves he wanted and exchange them for the goods he had brought. Usually young, strong healthy slaves were selected, and more men than women were chosen. The slave captain would then sail with his human cargo across the Atlantic to the colonies in North America and the Caribbean. This three-step process in the slave trade – slave ships sailing from Europe to Africa and then to the Caribbean – was called the Triangular Trade. The trip from Europe to Africa was called the Outward Passage, the trip from Africa to the Americas was called the Middle Passage and the trip from the Americas to Europe in which cargoes of rum, sugar, tobacco and other produce bought with the proceeds of slave sales were shipped was called The Inward Passage. 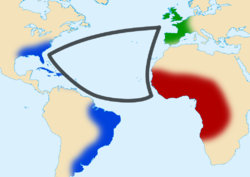 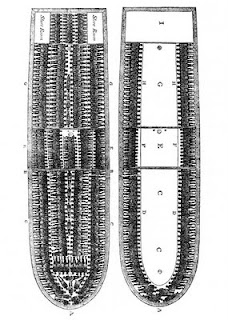 Men were crammed below decks in handcuffs and leg irons. Women and children were not chained and were housed in separate quarters from the men. All however, were treated with brutality. Slave captains packed the ships to capacity with human cargo. The journey lasted anywhere from six weeks to three months depending on the weather and the distance to be covered. In good weather slaves were allowed on deck twice a day for exercise. Below deck living conditions were appalling.  There were no washroom  facilities and slaves had to relieve themselves were they were. Many suffered from seasickness, dysentery and small pox. By the time they reached their destination many were ill and weak, and some died on board. In addition to the appalling physical conditions, there was also the mental stress. Many Africans became despondent and threw themselves overboard. Those who were rescued were beaten for trying to escape.
For more than three centuries millions of people were forcibly transported from their homes in Africa, across the perilous Atlantic Ocean to the New World, where they were forced to labour on sugar plantations for the rest of their lives. This enslavement  of a people continued until events in Europe changed the fortunes of the West Indian and North American colonies. Humanitarians started questioning the validity of slavery, there was competition from beet sugar producers in Europe, and the advent of the Industrial Revolution spawned the rise of a new group of influential men in the British Parliament who believed that slavery was no longer economically viable.

From 1770s onward, several influential pressure groups arose in England and France calling for an end to the slave trade and slavery. They became known as abolitionists. These abolitionists were religious humanitarians (Quakers, Methodists, Evangelical Anglicans, Baptists and Moravians), intellectuals, workers and a few former slaves. They mobilised popular opinion, using mass meetings and petitions. The most notable of the abolitionists were Granville Sharp, William Wilberforce, John Wesley and Thomas Buxton. In addition to the abolitionists, an economist Adam Smith argued that free labour was cheaper than slave labour which he showed to be uneconomic.

In France and England the ideas of  the Enlightenment and the French and American Revolutions also helped to fuel the demands to end slavery.There was of course fierce opposition to the abolitionists. British planters, ship owners, merchants and bankers were in favour of continuing slavery. Their argument was that slavery was economically essential to Britain and her colonies.

Over time the abolitionists’ campaign gained momentum. William Wilberforce made several attempts to introduce a bill in parliament outlawing the slave trade. Finally in 1807 the Abolition Act was passed abolishing the slave trade. The law became operational on 1 January 1808. The abolitionists hoped that by ending the slave trade no more slaves would be coming from Africa and therefore slavery would gradually come to an end, but this was not the case. The planters continued to use slave labour on their estates.
When it became apparent that slavery was not going to end, the abolitionists tried another strategy that was meant to make the life of the slaves less unbearable. It was called the Amelioration policy. Under this policy or law, female slaves were not to be flogged and slaves were not allowed to work on Sundays. Slaves were also to be allowed to give evidence in court as long as a Christian minister could vouch for the slave's understanding of what an oath meant. The Amerilioration laws met with a lot of opposition, and when it became obvious that they would not be enforced, the abolitionists decided to try for the abolition of slavery. It took another twenty seven years after the abolition of the slave trade, before slavery itself was abolished.
In 1833 Thomas Buxton presented The Emancipation Bill in the British Parliament. The Act was passed and came into effect on 1 August 1834. On that day, thousands of slaves in the British West Indies became free men and women. 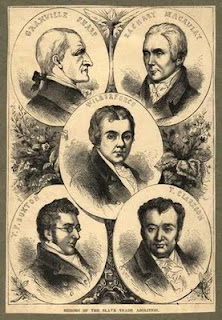 How the declaration was published in Britain
Guardian UK
Throughout the British dominions the sun no longer rises on the slave.  Yesterday was the day from which the emancipation of all our slave population commences: and we trust the great change by which they are elevated to the rank of freeman will be found to have passed into effect in the manner most accordant with the benevolent spirit in which it was decreed, most consistent with the  interests of those who benefit it was primarily intended, and most calculated to put an end to the apprehensions under which it was hardly to be expected that the planters could fail  to labour as the moment of its consummation approaches.  we shall await anxiously the arrivals from the West Indies that will bring advices to a date subsequent to the present time.
It's not a very pretty picture is it?