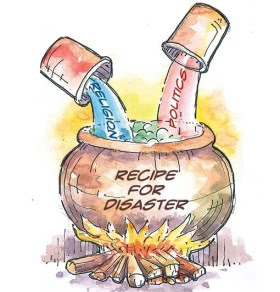 This post should probably be in Bee's Upfront and Serious.
Growing up in a military family, I was taught that there are two things that were never discussed publicly - politics and religion.  One's political affiliations were private and personal and others only knew your religion by which church you went to.  All military and formal church services were held in the Anglican Church on camp.

It is only in the last few years that I have opened up to discussing both topics and even though I know I should know better, I have become embroiled on more than one occasion in both topics on another site.  Every time I do it, I promise myself I will never do it again because I cannot bear the hostility and bashing that comes with what is supposed to be a debate.  Non believers don't discuss - they insult and use sarcasm as a tool in their so called arguments. They are arrogant and incapable of making a comment without throwing in a personal insult.  They tell you you are stupid, uneducated, ignorant, that you are a puppet, go on to discuss you with other parties and before you know it, they gang up as it were.

The political topics are much the same.  Don't even attempt to enter a discussion whereby you may believe that Obama is right about going back to the 1967 lines dividing Israel and Palestine. Don't point out that whilst he is the President, he has a Cabinet which takes part in the decision making process.   People are biased and are not open to discussion.  I have said over and over again that everyone is entitled to an opinion but when those opinions are not based on a person's politics and policies but rather his ethnicity, I have a problem.

Sugar coat it how you want, the truth will always out.  There will always be arm chair critics but whether the discussion is about religion or politics, mutual respect and good manners are called for.

Maybe the military had it right when religion and politics were taboo subjects.  We may have come a long way in that we have the freedom to discuss anything we want to but in doing so, I have found aggression takes a front seat and that we really aren't very nice to each other.