I have just watched. 'Mrs Brown' the story of Queen Victoria and her ghillie/manservant, John Brown who brought her out of mourning following the death of her beloved Albert. It has a great cast including Dame Judi Dench, Billy Connelly a
nd Geoffrey Palmer. I'm a Royalist and a lover of history but this film didn't quite do it for me I'm afraid.

Because Brown's diaries were destroyed by the Royal Family (Victoria's son and heir) we will never know the true relationship between Victoria and Brown although rumour has it that they were secretly married and that she bore him a daughter. Even if that is not true, it's said the lady had a ferocious sexual appetite so I'd doubt that Brown got off lightly! Oh to have been a fly on the wall! 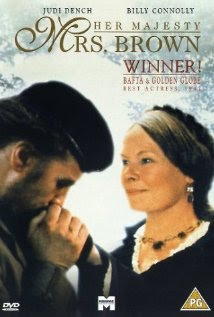