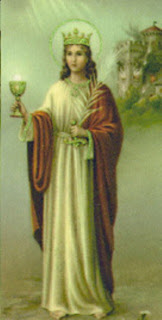 Today is the Feast of St Barbara although she was removed from the liturgical calendar of the Roman rite in 1969 by Pope Paul VI because  there is no reference to her in the authentic early Christian writings.  I grew up knowing that the 4 December is my 'Name Day' and it was always celebrated.  This was down to the Austrian side of my heritage because in Europe, 'name days' are seen as being important.

There is a great deal written about St Barbara and she continues to be a popular saint in modern times. She is known to be the patron saint  of artillerymen, military engineers, miners and others who work with explosives because of her legendary association with lightning and mathematicians.   Our association stops with mathematics as that was my worst subject and she did not help me in that area at all!  It has also been said that she is the patron saints of masons.

Barbara was the daughter of a rich pagan named Dioscorus who kept her shut up in a tower in order to preserve her form the outside world.  Unknown to her father, she had become a Christian  and rejected the man that her father proposed be her husband.  Legend has it that her father before leaving on a long journey had a bath house built for her. During her father's absence Barbara had three windows installed as a symbol of the Holy Trinity although only two were intended.

Upon her father's return she revealed to him that she was a Christian at which he pulled his sword to kill her. Miraculously through her prayers the tower wall opened and she was transported to a mountain gorge where two shepherds watched their flocks. Dioscorus pursuing his daughter was rebuffed by the first shepherd.  The second betrayed her after which he was turned to stone and his flock, to locusts.   Taken by her father before the prefect of the province, Martinianus, Barbara was cruelly tortured but she held onto her faith.  During the night the dark prison was bathed in light and new miracles occurred,  Every morning her wounds had healed.  Torches that were lit to burn her immediately went when they were put near her and finally she was condemned to death by beheading.  Her father carried out the evil deed  but there was punishment for him.  On his way home having beheaded his daughter, he was struck be lightning and consumed by fire was burned to death.   Barbara was buried by a Christian, Valentinus and her tomb became the site of miracles.

In the 12th century Barbara's relics  were taken from Constantinople to the St Michael's Golden-Domed Monastery in Kiev where they were kept until the 1930s.  They were then transferred to st Vladinimir's Cathedral also in Kiev.


Orthodox Christians including Anglicans have never ceased to venerate St Barbara although I think it's a little sad that she was removed from the 'official list'.
Artillery regiments throughout the world celebrate their patron saint on this day.  The US Artillery Associations both army and air defence  maintain the Order of St Barbara and in the mining town of Kalgoorlie in Australia, she is venerated in the annual St Barbara's Day Parade.  St Barbara's Day is also celebrated throughout Latin America.
I don't look much look like her, do I??
Posted by The Blog of Bee at Sunday, December 04, 2011