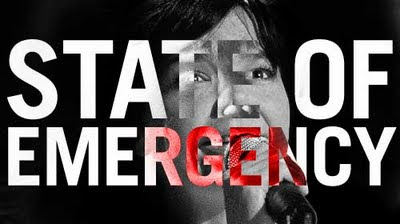 A limited State of Emergency has been put into place in this twin island Republic of Trinidad and Tobago. I don't have time to write about it now but this is how CNN reported it.
They say a 'partial state of emergency' when in effect, the whole island is being shut down..

By the CNN Wire Staff
August 22, 2011 -- Updated 1630 GMT (0030 HKT)
Port Of Spain, Trinidad (CNN) -- A partial state of emergency was imposed Monday on crime hotspots across Trinidad and Tobago, and the government said it will enforce curfews in certain areas to curb the spiraling rate of drug-related murders in the Caribbean islands.
This weekend alone, 11 people were fatally shot, bringing the total for the year so far to 264, authorities said.
Speaking to the media, Prime Minister Kamla Persad Bissessar, who took office 16 months ago said her national security advisers believe the discovery and seizure of large amounts of cocaine this past week may be responsible for the untenable situation.
She said, "We will search them out and bring them to swift justice," noting that her government will not allow a handful of thugs to hold ransom the majority of law abiding citizens of Trinidad and Tobago which celebrates its 49th year of independence on August 31.
Journalist Gideon Hanoomansingh contributed to this