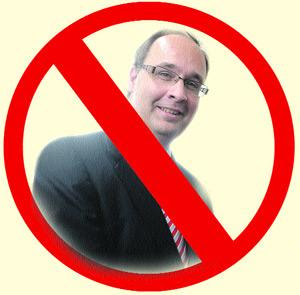 NO ENTRY American strategist for UNC election campaign blocked at airport Carolyn Kissoon and Nikita Braxton Saturday, April 24th 2010
A dirty trick of political victimisation that will cause international scandal and disgrace.

That is how UNC Political Leader Kamla Persad-Bissessar described the deportation yesterday of her campaign strategist, United States citizen Bernie Campbell. Campbell was detained at Piarco International Airport on Thursday night, kept in immigration custody overnight, and put on a plane back home yesterday.
Before leaving, Campbell said he was being taken in a security vehicle to a hotel to stay overnight, when the vehicle was stopped by an unmarked car and he was questioned by unknown men.
Campbell, said to be traumatised, was also a member of the campaign team that helped craft the campaign of US President Barack Obama.

The US Embassy has asked Government for an explanation on why Campbell was deported. Government has denied having a hand in the action. (See related stories)
The law allows a foreigner to work in Trinidad without a work permit for up to a month in a 12-month period.
But Persad-Bissessar said yesterday, ’I believe the people of this country are not blind (or) stupid. Whilst it may distract from our campaign to some extent, it will not damage our campaign to the extent that we win. In spite of every dirty trick of the Manning team, we will win.’


She said two days before Campbell’s arrival, two other members of the Obama team flew into Trinidad without incident. They left Trinidad yesterday, with no plans of returning.
Persad-Bissessar said, ’This could have serious repercussions on our good diplomatic relationship with the United States. I condemn it (deportation).’

She said Campbell’s firm did similar political work around the world.

According to a press release from the UNC, Campbell arrived on American Airlines flight 1819 on Thursday, and upon presentation of his travel documents was informed he was ’denied entry on the advisement of the Minister of National Security’.
Persad-Bissessar stated in the release, ’Campbell was given a document which pertained to his denial of entry which he declined to sign. He was left standing in what had become an empty terminal for well over an hour. Eventually he was informed that he would be taken by security to a hotel nearby and then brought to the airport in the morning (yesterday) to be placed on the American Airlines flight scheduled for departure at that time.’

Persad-Bissessar said Campbell left the airport in a security vehicle which was intercepted en route to the hotel by an unmarked car. The security guard and Campbell were questioned by two men, she said. Campbell returned to the airport and was escorted by airport security on board American Airlines flight number 1818.

Persad- Bissessar stated, ’The team said they have never been subjected to any rejection from any of the countries visited before and were surprised by the experience encountered here. My party and I condemn the high-handed, authoritarian display of power perpetrated by the Manning administration upon the legitimate democratic exercise of the party in conducting its election campaign.’
She said the deportation would be ’reported negatively across all diplomatic channels and via international media networks worldwide’.

Persad-Bissessar added: ’While Calder Hart, a citizen of Canada and the former chairman of UDeCOTT, who is the subject of a criminal probe, is allowed to go freely and taken through the VIP channels upon his last entry to the island, the political strategist employed by the United National Congress was denied entry into Trinidad and Tobago.’