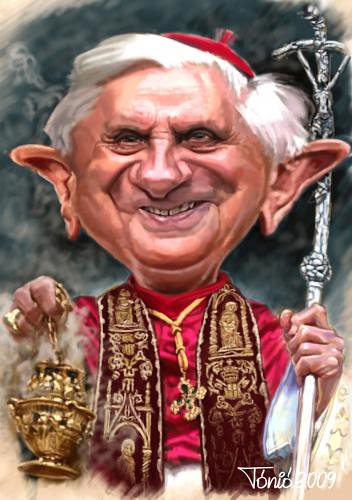 Seems the Roman Catholic Church hit the headlines with a bang a couple of weeks ago.

Whilst the Archbishop of Canterbury, Rowan Williams was busy worrying about global warning instead of some of his flock’s displeasure with the way in which their church was going, the Pope quietly muscled in leaving the head of the clergy of the Anglican church as they say in England, ‘gob smacked’. One headline in a UK newspaper read:

If our Archbishop spent less time fretting about climate change, he might notice the pope is about to mug him

Quite an embarrassment really even though ‘talks’ about giving disgruntled Anglicans a place in the Roman Catholic church had been going on for some time. But Williams was caught napping and although publicly very gracious about the ‘coup, he was by all accounts, not quite so cool behind closed doors.

There are groups of Anglicans in the UK (worldwide too) who are none happy with the ordination into the priesthood, of women. Neither are they happy with their gay clergy and the elevation to Bishop again of gay clergy. They probably have other issues too.

So in steps Benedict establishing a special structure ("personal ordinariates" ) for those Anglicans who wish to be in full communion with the Roman Catholic Church while preserving aspects of their Anglican spiritual and liturgical heritage. In establishing the new jurisdictions, Pope Benedict is responding to ‘many requests’ submitted by Anglican groups including Bishops who will not be able to retain their positions. Incoming married Anglican priests will be able to be ordained Roman Catholic priests and married lay Anglicans will be accepted for ordination. Where will that leave already ordained RC priests? And Roman Catholics who decide that a religious life is their calling but that they would quite like to get married too? Nowhere! The rules for those stay the same.

The announcement much to my amusement, caused a public outcry in the UK. We seem to have overnight, moved from being an atheist country to defender of the faith. Past articles on religion have evoked comments such as:

Religion is a fairy tale.
Talk about making up a story.
Get real. There is no God.
Enjoy life – there is nothing after this.
It’s a myth.
It’s outdated.
Stupid men in stupid dresses.

“This is a Christian country. We are the Church of England.”

“That so many may take up the Pope's offer demonstrates the moral bankruptcy of the Church of England, not the "machinations" of the Holy Father.”

“The Anglican Church is a Church, sure, but it's also an established National Church - it might be good to have someone at the top who liked the country, its people, its history and its culture”.


“Remember god asked through his one begotten son to be united as Christians. This is why the Catholic (which means universal by the way) looks for unification of all Christians.”

“It is incorrect to describe this as an attempt to 'poach' members from the Church of England. The Pope is responding to approaches from various segments of the Anglican Communion for just such an arrangement as he has now approved.”
“The Church of England is failing because of its lack of moral conviction and guidance.”

“People are crying out for a strong lead and firm boundaries, not something that fluctuates with the tide of perceived public opinion and 'modern' values (the same may be said for many aspects of life today). In particular it needs churchmen who believe in the core message that they are supposed to promote and who communicate that belief loudly and clearly.”

“The rot probably set in with the ex Bishop of Durham and his dismissal of the Resurrection as a mere 'conjuring trick with a bag of bones'. He should have been summarily dismissed for that remark.”

“The Anglican church has become a parody of a Christian Church.”

“The Catholic church can certainly do no worse than the C of E in defending our Christian heritage and probably much better.”

Some people are talking about the heritage of the Anglican church. I wonder how many Britons actually know the origins of the Anglican church and that it is a schism! Had Henry VIIIth kept his hands to himself, stayed in Catherine’s bed and not lusted after Anne Boleyn there would not today be an Anglican church which some glibly dub, ‘as British as red telephone boxes and black cabs’!!!

I think it’s extremely gracious of the Pope to invite those who want to come home, to actually do so whilst retaining their traditions. It was done for disgruntled Episcopalians in the 80s but very, very quietly. There are also already married RC priests who were once Anglican priests, shepherding flocks in the UK. But now that it seems as a free for all – ‘all ye who want to, come home’ I believe that what is good for the homecoming Anglican is good for the tried and true Catholic. The celibacy of a Roman Catholic priest is a man made law and there are many arguments as to why this is so. From finance to not being able to manage pastoral care and family efficiently. I am aware that it is not as simple as that but is it time to rethink this part of Canon Law?

Methinks my church is on a major recruiting drive!!