Preparation for the Fifth Summit of the Americas 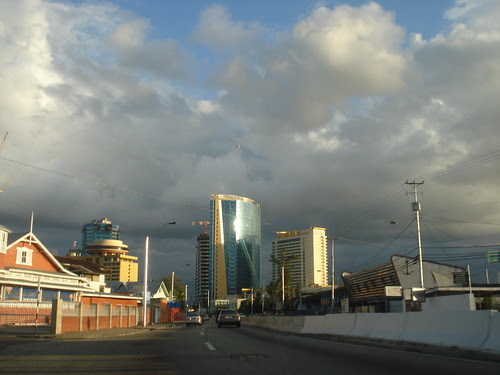 What is this you may ask? No it is not another foto of an overcast sky!

I took this whilst in my car on Wrightson Road (reclaimed land), Port of Spain. To the right, out of sight is the sea. In the distance, the yellow building to the right is the new Hyatt Regency Hotel. The building with the turquoise coloured windows (as yet, unfinished - like many government buildings on the sea front) is going to house some government department.

The building on the left with the circular roof is the Crown Plaza Hotel. When I came to Trinidad in 1992 it was a Holiday Inn and apart from the government financial complex, was the tallest building on the island! The 'round top' is a revolving restaurant.

I am posting a Hyatt foto because that hotel is the venue for the Fifth Summit of the Americas which takes place from the 17 April. The Summit lasts for four days and will be attended by thirty three Heads of State together with their spouses. President and Mrs Obama will be here and there is apparently a contingent of 1,000 coming from the US.

The preparations for this event are well under way with frequent dry runs which is turning our already traffic nightmare into one of even larger proportions. Walls are being built to hide the shanty towns and the Prime Minister is now telling those living in them that they are living in 'gated communities'. The residents are buying it!! The price of a house in a real gated community runs into millions of dollars. There is an ongoing massive planting and clean up campaign which leads me to believe that we should have a summit every two months. The homeless are being taken off the streets and put, God alone knows where.

Port of Spain and environs have been colour coded, the immediate area of the venue being red. My daughter is in that area and her company applied for ID badges for its employees. That entailed her filling out a very detailed form which asks for everything personal - the only thing it doesn't ask for are the names of her great grand parents!!! However it means that my car gets a pass to go into the red zone so who knows, I may get to catch a glimpse of the US President's car (which is being brought in!) as it makes its way to the Hyatt. No, he is not staying there.

All government buildings will be closed which means yet another holiday for government workers and it appears that the government of Trinidad and Tobago may well enforce a Public Holiday to 'keep people off the roads' during that period. Better they make it a curfew because I hear that thousands of Trinis are coming out in a bid to see the saviour of the United States of America.