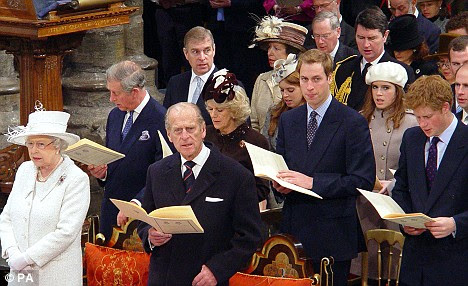 Wee Gordy Brown wants to bring in a Bill that if passed, will allow sisters to have rights over their younger brothers to succession to the throne.

This could end the centuries old law that gives men priority over their older sisters in the Royal line of succession It would also allow Royals to marry Catholics.

I have to question Brown's agenda. Is this a ploy to rid the United Kingdom of the monarchy? Or a ploy to cover his inability to run the country? In an effort to distract, does he want to be seen as a modernizing reformer who is all for championing the rights of women and Catholics long discriminated against?

"The Act of Settlement has long been a target of the political Left, who believe the 308-year-old pillar of the constitution is an offence against human rights" says Steve Doughty.

"What fun for the Left to fire a cannon ball into our history" says James Slack.

If this is seriously taken, there will be considerable doubts as to whether the Labour party has the best interests of the Monarchy at heart. Many Labour MPs are openly anti-monarchy and there are others I think who are "closet republicans" as Harry Phibbs has pointed out. It is said that many Nu Labour MPs, behind closed doors, do have not got a great deal of good to say about the monarchy.

Oh please let there be an election. My father served "King and country" in WW11 and "Queen and country" later and he did not do it to allow a bunch of lefties to leave a trail of devastation in its wake when it has finished ruining what was once Great.

I will be first in line at the door of the British High Commission here in Trinidad to cast my vote!